Washington, DC, June 24, 2014 — At a time when conflict, division, strife and stress are all too prevalent resulting in a scurry for solutions, a world renowned spiritual leader and humanitarian has declared that none of the world’s political, economic or social systems will work without humanism!

Addressing a jam-packed gathering at the American Enterprise Institute (AEI), Sri Sri Ravi Shankar, founder of the Art of Living, said, “No -ism will work without humanism”, and the heart of humanism is compassion.

When Arthur Brooks, President of AEI, asked, ‘Is your philosophy of compassion compatible with the free enterprise system’, the spiritual seer replied, “Definitely. Capitalism without compassion will not lead to a just society. Whether it is capitalism, socialism, whatever -ism it is, no -ism will work without humanism”. Whenever human values are missing, all the -isms just fall by the wayside, he emphasized.

Tuesday’s event was the second in AEI’s ongoing series of Conversations about Human Flourishing and Human Happiness, which began in February with another revered spiritual leader, the Dalai Lama. It was an uplifting, informative, insightful interaction between Sri Sri and Brooks which struck a chord with the attentive audience.

Sri Sri spoke eloquently in English about spiritual high truths. There is a refreshing sweetness in his manner and demeanor, and it came as a discovery that he is very witty while imparting words of wisdom!

When asked the perennial question, What is the secret to happiness?, the spiritual leader replied, “Just be yourself. Find the inner reservoir of peace that we have all been gifted with”. Throughout the course of the conversation, Sri Sri reiterated, “Find happiness within yourself”. He told the audience, “We are the source of happiness. Come what may, I’ll be happy and I want to spread happiness”!

Brooks, who studies the subject of happiness, disclosed his findings reveal that only one-third of Americans consider themselves very happy with their lives and he wanted to know what advise the spiritual leader can give so more people can be happy. Noting that “we face different situations”, Sri Sri replied, “mainly, it is stress that shrouds our happiness. Stress simply means too much to do, too little time and no energy. Now, either increase your energy level or reduce your demands, then you will be happy. Go slow. Drive behind a bicyclist”, he said, evoking laughter from the audience.

The spiritual seer emphasized the importance of silence. “Take a moment”, he told the gathering. “Observe your breath. Calm your mind, relax your body. It is very important to introspect. Being in the moment, relaxing connects you to yourself”!

An issue which concerns many of us these days is social media; is it affecting our happiness? Sri Sri cautioned about being stuck to Twitter or Facebook from dawn to dusk. “I think we shouldn’t be drowned in it”, he said. “At the same time, it is a very important media. Everyone should be on it because they get information right from the source”, and in a timely fashion. “It is a revolution. It is essential. At the same time, it should not be misused”, he warned.

The spiritual leader lauded the value of hard work which, he said, “keeps you out of trouble. If you don’t do anything, your mind runs too fast and goes where you don’t want to go. So, work is essential to keep yourself busy, to keep you sane and creative”!

During the course of the conversation, Sri Sri admitted, “My big problem is, I’m a dreamer! Knowing very well that there is violence, there are problems all over the world, I still dream of a violence-free society. It will take its own time. But, I can’t give up my dream”, he said.

Regarding the recent incident of his Art of Living center in Pakistan being gutted, he recalled how teachers were threatened, and that the Taliban claimed responsibility. “This is sheer lack of understanding, ignorance”, he said. “My way is the only way – this mind-set has created so many problems in the world, today. Fanatics, terrorists are nurtured with this belief”.

Regarding a solution, Sri Sri underscored, “I think it is absolutely essential today to give multi-faith, multi-cultural education right from young age, so a child doesn’t grow up thinking, only I go to heaven. By thinking that only I go to heaven, they create hell for everyone else”.

He reiterated, “I feel every child should know about the world’s religions and start respecting them all. Then, you grow up with a broad mind-set and terrorism can be nipped in the bud”.

Sri Sri suggested that world bodies like UNESCO should step up to the challenge and implement multi-religious, multi-cultural education all over the world. Scientific education must be combined with spiritual education, he reasoned. “United Nations can make it mandatory, like vaccination”, he told the gathering. “So, this will be vaccination against terrorism”.

He cited the success stories of Turkey and Jordan which welcome inter-faith dialogue. Regarding the conflict in Iraq, he noted, it “is not between Christianity and Islam. It is between Islam and Islam. This is dangerous”, he warned. “A sense of tolerance, appreciating others’ point-of-view, needs to be cultivated. Otherwise, no religions are safe in the world”, he said.

“Spirituality has a big role to play in uniting people of all different religions to come to an understanding that we are all part of one universal human family”, he told the AEI audience. “Spirituality rises above religion and unites people’s hearts and minds. And every religion has got spiritual values. That needs to be highlighted more than the practices”, he said.

When prodded that India is being slowed down by its messy democracy, the spiritual leader made it clear, “We would prefer to be a democracy even if it is slower, rather than a dictatorship which will be faster. Different voices are heard in a democracy, he said. “For anything, we would not want a dictatorship”.

Sri Sri pointed out that corruption and the numbers game have caused big problems in India. While, there are good leaders in the government who want economic reforms., he bemoaned that they have always been put down by regional parties. “This time, there is a clear mandate”, he said, on an optimistic note.

It is well known that Sri Sri shares a special rapport with Prime Minister Narendra Modi who he described as “a tough man with a soft heart. Few people know that he has a soft heart”, he told the AEI gathering. “And he means business”, he added.

Sri Sri pondered when asked, Who influenced you? He acknowledged being inspired by manifold people, and being receptive to myriad influences. “It starts with my mother”, he told the gathering. “When you are in the moment, you are able to draw inspiration from everybody else. Anytime, anywhere, people can inspire you because it is an internal phenomenon where you are in the moment and you are willing to move on. Inspiration is opening that source of energy within you and anyone can become a catalyst for that – a child in the street, a carpenter, a gardener”!

When asked if evil is a lack of goodness, Sri Sri replied, it is the absence of love and light. He explained that in India, there are six types of evil: pride, greed, arrogance, jealousy, anger and lust. “These distortions of love, lack of knowledge, lack of wisdom, can destroy one’s life”, he cautioned.

Brooks noted the similarity with Christianity which warns about the seven deadly sins, the addition being gluttony. “Perhaps as India becomes more and more prosperous, you will add gluttony”, he said, to laughter from the audience. Sri Sri responded, “We cover gluttony in greed”.

Responding to the question, ‘How can we alleviate the negative consequences of materialism’?, the humanitarian said, “Being rich is not vile. It is wrong to exploit people and the planet”! Sri Sri spoke in favor of corporate social responsibility, of how the creation of wealth should always go along with distribution.

“There is a joy in giving which is much more than the joy in taking”, he said. “Somewhere, we need to graduate from taking to giving”! He made it clear that “making money through unethical means is not going to give you a good night’s sleep. That is for sure”! 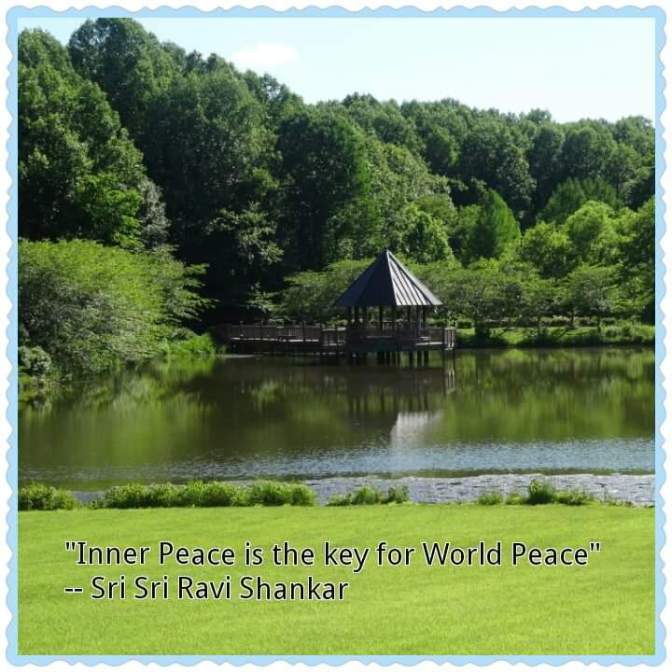