Washington, DC, August 15, 2016 – Over 400 members of the illustrious Indian-American community partook in the 70th Independence Day celebration hosted by the Indian envoy at his official residence here.

The event began with the customary and patriotic flag hoisting by Ambassador Arun K. Singh following which he read President Pranab Mukherjee’s candid address to the Indian nation on this landmark anniversary.

“It is a very important milestone”, emphasized India’s top diplomat in the US. “We have done a lot of achievements in the 70 years of India’s independence”, he told us. “As you could see from the speech of the president and the speech of the prime minister, we have a very strong vision for taking India forward for the benefit of the people of India and, of course, in the global context”.

We caught up with Nisha Biswal, Assistant Secretary of State for South and Central Asian Affairs in the US State Department, who has been regularly attending the annual celebration at the Embassy Residence. “I just want to wish everyone in India a very happy Independence Day”, she said. “This is such a big anniversary of independence; it is the 70th anniversary”, she noted.

“India stands as a testament to democracy, to liberty and to that spirit of inclusive democracy that stands as an example around the world. So, on behalf of Secretary Kerry, on behalf of the President, I want to take this opportunity to wish all of our friends in India a happy Independence Day”, Biswal said.

It was a hot morning even for mid August. But, it was an enthusiastic crowd which reveled in a heart-warming function held outdoors on the well-manicured lawn of the Embassy Residence – an idyllic setting!

A highlight of the program was a cultural segment featuring soul-stirring, patriotic songs by: Shaily, Ayush and Chirashree Pal; and Swati Kanitkar who deeply moved the gathering with her powerful rendition of the timeless classic song, ‘Ae mere watan ke logon’. Swati is a supremely gifted singer based in Herndon, VA.

It goes to the Embassy’s credit for always attracting the finest talent in the Indian-American community!

The event ended on a delectable note with vegetarian delicacies by the Maryland location of Woodlands, owned and managed by Anand Poojary.

In a compelling address on the eve of India’s Independence Day, President Mukherjee linked the safety and security of women and children to the well-being of the state and society. “Every incident of violence against a woman or a child inflicts a wound on the soul of the civilization. We cannot call ourselves a civilized society if we fail in this duty”, he said.

In the four years of his presidency, he has seen “forces of divisiveness and intolerance trying to raise their ugly head. Attacks on weaker sections that militate against our national ethos are aberrations that need to be dealt with firmly”, he averred. Expressing confidence that the collective wisdom of Indian society and polity will ensure that such forces are quelled, he believed India’s remarkable growth story will continue uninterrupted.

“One unique feature that has held India together is our respect for each other’s cultures, values and beliefs”, he noted. “The very essence of plurality lies in cherishing our heterogeneity and valuing our diversity. In the networked environment of today, a caring society can only be developed by harmonizing religion with modern science”. Quoting spiritual leader Swami Vivekananda, he said, “What is needed is a fellow-feeling between the different types of religion, seeing that they all stand or fall together, a fellow-feeling which springs from mutual respect, and not the condescending, patronizing, niggardly expression of goodwill”.

The President spoke of taking “destiny in our own hands to build the India of our dreams” and creating “a future which will economically empower 600 million youth, build a digital India, a start-up India, and a skilled India”. At the same time, he cautioned, “As we build an India of hundreds of smart cities, towns and villages, we must ensure that they are humane, hi-tech and happy places leading to the creation of a technology-driven, but compassionate society”.

President Mukherjee emphasized, “India will grow only when all of India grows. The excluded ones have to be included in the development process. The hurt and the alienated have to be brought back into the mainstream”. Extolling the virtues of innovation, he believed, “inclusive innovations linked to the aspirations of our people can benefit a wide spectrum of society as well as preserve our diversity”.

About the nation’s strong foundation, he noted, “When we gained independence in 1947, nobody believed that India will survive as a democracy. Yet, seven decades later, one and a quarter billion Indians with all their diversity have proved those forecasts wrong. The strong edifice of democracy built by our founding fathers on the four pillars of justice, liberty, equality and fraternity has withstood several threats from both within and without and has grown from strength to strength”, he said.

The President lambasted “the inhuman, mindless and barbaric modus operandi” of terror groups which have recently caused mayhem in France, Belgium, United States, Nigeria, Kenya, Afghanistan and Bangladesh. “These forces now pose a danger to the entire comity of nations”, he warned. “The world will have to fight them unconditionally and in one voice”, he said.

The President’s address was replete with references to the virtues of peace. He made it clear, “India’s focus in foreign policy will remain on peaceful co-existence and harnessing technology and resources for its economic development”.

The President pointed out, “India through its unique civilizational contribution has repeatedly conveyed the message of peace and harmony to the trouble torn world”. As a reminder, he aptly quoted British historian Arnold Toynbee who, in 1970, said: “Today, we are still living in this transitional chapter of the world’s history, but it is already becoming clear that a chapter which had a western beginning, will have to have an Indian ending, if it is not to end in the self-destruction of the human race”.

Furthermore, he noted, Toynbee believed that at the crossroads of human history, the only way of salvation of mankind is the Indian way.

The President concluded his address with an invocation from the Upanishads for peace and goodwill among all:
“May God protect us;
May God nourish us;
May we work together with vigor and energy;
May our studies be brilliant;
May there be no hostility amongst us;
May there be Peace, Peace, Peace”. 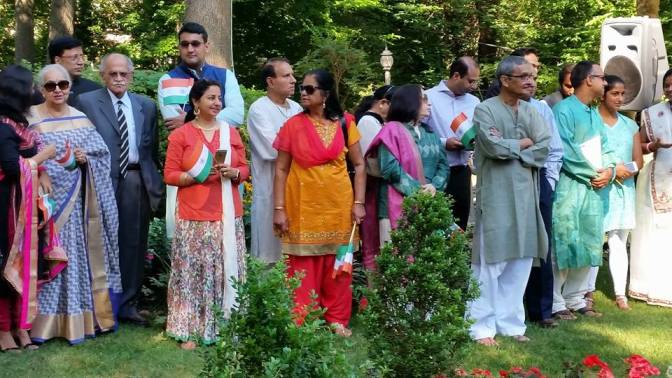