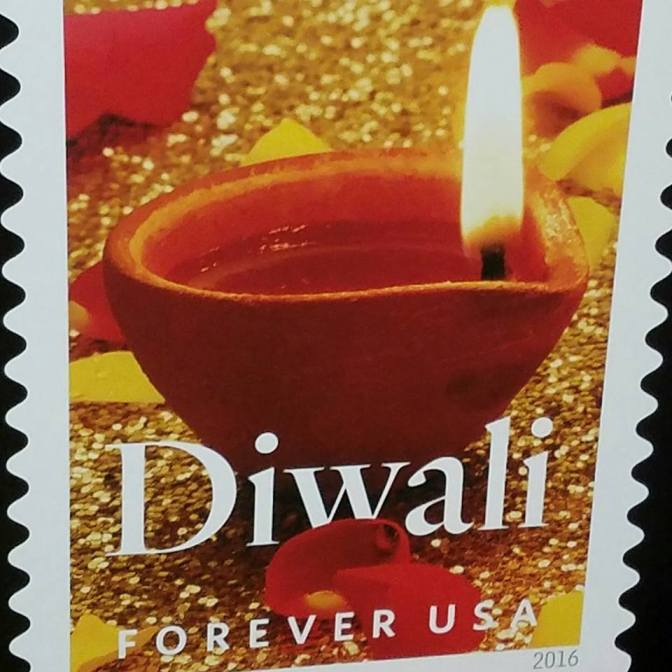 New York, October 5, 2016 – A commemorative Diwali stamp issued by the United States Postal Service (USPS) was released today at an elaborate ceremony held at the Indian Consulate in New York.

The stamp has been launched well in time for Diwali, the festival of lights, which is on October 30 this year. It features a traditional ‘diya’ (lamp) with rose petals and is a ‘Forever’ stamp which never decreases in value no matter when it is used. And it is gorgeous!

Noting that nearly one billion people around the world celebrate Diwali, Congresswoman Maloney told the gathering, “Today, we dedicate the Diwali stamp and celebrate the achievements of Indian-Americans”.

“Diwali is coming early this year”, she said, pointing out that “Diwali will be celebrated on October 29 and 30, but we’re celebrating early with the official dedication of the stamp”.

Clearly elated, Congresswoman Maloney noted, “After many years, Diwali has finally received its own commemorative stamp, rightfully joining the ranks of other major religious and cultural holidays such as Christmas, Kwanzaa, Hanukkah and Eid”.

Thanking Megan Brennan, Postmaster General of the United States, for the issuance of the stamp, the lawmaker affirmed, “If you want a job done, give it to a woman”. Brennan is the first female to occupy the top position in the world’s largest postal organization.

Congresswoman Meng declared she is “proud to join the United States Postal Service for the unveiling of the Diwali stamp. Wonderful ceremony today at the Indian Consulate in New York”, she gushed.

About Diwali, the lawmaker said, “It is a special time for family and friends to come together and to celebrate the triumph of good over evil, light over darkness, and knowledge over ignorance. It is celebrated by Hindus, Sikhs, Jains, and some Buddhists throughout the United States and across the world. The issuance of this stamp is the result of almost ten years of community activism and advocacy, and I thank everyone who has worked to make this possible, including Congresswoman Carolyn Maloney who has led the Congressional effort for many years”.

Ambassador Das thanked the USPS for holding the historic event at the Indian Consulate and for making the community’s dream come true of having “a stamp they can call their own”.

Mehra concurred that the stamp “addressed the wishes of the Indian community. Proclaiming it is “an honor” to launch the Diwali stamp, she told the gathering, “We hope these will light up millions of cards and letters as they make their journey through the mail stream”.

For Ranju Batra, the stamp was a dream come true! “Now, for the first time, there is a stamp that celebrates Hindus, Sikhs, Jains and Buddhists as Americans forever”, she said. “The Diwali stamp will be a matter of pride for generations to come”.

Her husband, Ravi Batra, noted that ever since the American Revolution, “destiny has beckoned the US and India to be the closest of allies”. He believed the stamp “represents nothing short of respectful inclusive indivisibility within America, and between the two sovereigns”.

Upon reading a proclamation on the occasion, Stringer told the gathering, “I have my stamps for the holiday season – and I’ll be using them”. 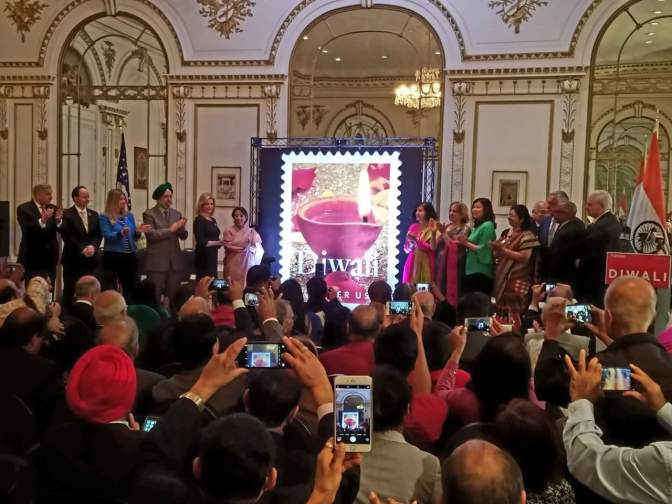